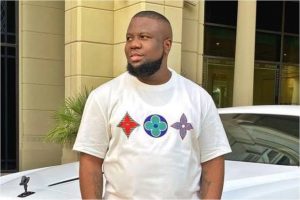 A tweet from the camp of award-winning Nigerian investigative journalist Mrs Kemi Olunloyo hints that convicted Nigerian internet fraudster Hushpuppi has reportedly died in the US.

Rumour has it that the socialite allegedly died whiles in police custody overseas.

Ever since Hushpuppi was arrested on the 25th of June, 2020 by the Dubai Police Department, Kemi Olunloyo has been providing updates on his arrest and court proceedings which was keenly followed by most Nigerians and his fans worldwide.

Though she did not categorically mention Hushpuppi’s name, she’s accustomed to referring to Hushpuppi as ‘The boy‘.

Her tweet has thus sparked concerns and a hot debate on social media with many people trying to get more explanation or clarification of her tweet.

Let’s keep our fingers crossed and hope this is just a rumour and not the reality on the ground.