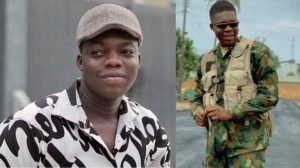 Hilarious comedian, Ahmed Gafar known as Cute Abiola, who was arrested and detained by the Navy officials, has been released.

This information was quickly averted by a Naval spokesperson, who said the comedian was detained over violation and breaching of Navy Force social media policy.

The spokesperson said the comedian was summoned to the office, which he refused to show up, hence the detainment.

However, in a new report, the comedian is said to have been released according to the spokesperson, who had a brief discussion with a news source.