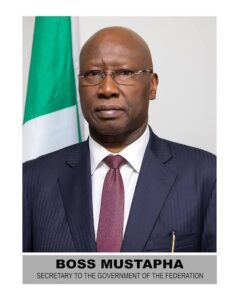 There is currently tension in Garka, a village in Hong Local Government Area of Adamawa State, over a Boko Haram attack in a neighbouring village.

Boss Mustapha, Secretary to the Government of the Federation, hails from Garka.

Residents of Garka are currently living in fear following the killing of at least 18 persons at neigbhouring Dabna village.

It was gathered that the incident happened in the wee hours of Wednesday.

One of the residents said half of the people living there have migrated to neighboring villages.

The villager also confirmed that there are concerns that the attackers could head to Garka.

A survivor, Hilda Joshua, said apart from those killed, many persons sustained injuries in the attack.

He added that he managed to escape to the bush but that some of his family members and neighbours were trapped in the village.

Another survivor said apart from those killed in the village, he saw three corpses lying in the bush around Kwapre, a neighbouring village.

Local sources reported that military fighter jets hovered around the villages and engaged the attackers.