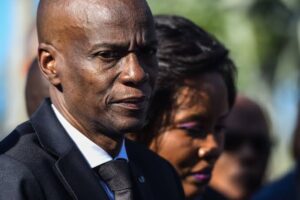 President Jovenel Moïse of Haiti has been shot dead.

Moise was assassinated after a group of unidentified people attacked his private residence.

The Country’s Interim Prime Minister, Claude Joseph, disclosed this in a statement on Wednesday.

Joseph added that the First Lady, who was injured in the attack, is being treated in the hospital.

He condemned what he described a “hateful, inhumane and barbaric act,” adding that Haiti’s National Police and other authorities had the situation in the Caribbean country under control.

The killing comes amid deepening political and economic stability and a spike in gang violence.

The deceased had been in power since February 2017, after his predecessor, office, Michel Martelly, stepped down.

JUST IN [PDP Presidential Primaries]: Each Delegate Gets Over $50,000 Largesse As Atiku, Wike, Others Compete