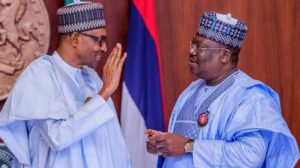 The Senate, on Wednesday, approved the request of President Muhammadu Buhari to borrow N2.3 trillion (about $6.183 billion) to fund the deficit in the 2021 Appropriation Act.

This followed the consideration of the report of the Committee on Local and Foreign Debts, chaired by Senator Clifford Ordia (PDP, Edo).

Buhari had, in May, sought the approval of the National Assembly to source the fund from multiple avenues, including multilateral and bilateral lenders, as well as the International Capital Market (ICM) via issuance of Eurobonds.

“We estimate that Nigeria may be able to raise $3 billion or more, but not more than $6.183 billion (the amount provided in the 2021 Appropriation Act) in a combination of tenors between five and 30 years,” Buhari had said.

According to the president, the outcome would be determined when the nation approaches the market, noting that “not only is the ICM now open to issuers like Nigeria and interest rates lower than the levels In 2020, given the recent monetary policy stance, as well as rising levels of inflation, the level of liquidity in the domestic market has decreased while domestic interest rates are beginning to rise.”

He explained that the loan would enable the Federal Government fund critical infrastructural projects in transportation, health and education, among others.

The Senate approved the president request for the issuance of $3 billion but not more than $6.1 billion Eurobond in the International Capital Market for the implementation of the external borrowing of N2.3 trillion to finance part of the deficit authorized in the 2021 Appropriation Act.

The Red Chamber also approved the committee’s recommendation that the amount be raised from multiple sources such as the International Capital Market and any other Multilateral or Bilateral sources.

It also directed the Minister of Finance, Budget and National Planning, the Director General of the Debt Management Office and the Governor the Central Bank of Nigeria to submit to the National Assembly, within 10 working days, a letter containing the United State Dollars amount raised and received as a result of the above approval together with the applicable exchange rate.