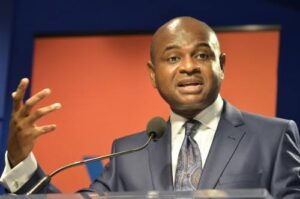 A former presidential candidate of the Young Progressives Party, YPP, Kingsley Moghalu, has urged President Muhammadu Buhari to invite groups agitating for secession for a dialogue with a view to addressing their concerns.

According to Mr Moghalu, a better approach to addressing the problem will be to “invite them to the table”.

He said: “There are many places in Nigeria that are theatres of low-level war at this point, especially the north-east. We know what is happening in the north-east.

“And so what happens is that when you respond to the rising violence in the south-east in a manner that shows a lot of muscularity, but we know that the government has not been able to contain full-blow terrorism and war against the country in the north-east, people begin to draw inferences of a double standard. And this I think is what the government must avoid,” he said.

“The whole question of the secessionist movement is that the government is running the risks of making that movement mainstream by its response.

“I think that the government should be able to invite, whether it is IPOB or Sunday Igboho, all the secessionists; invite them to the table.

“They are essentially political agitators. You can call them terrorists. That is your own prerogative but we know what terrorism means in reality. Boko Haram are terrorists. We know that.

“When people begin political agitations and we very easily throw terrorism at them just because they are mouthing off and speaking in a language that nobody likes or insulting their fellow citizens, that is their way of handling this type of thing. So, you bring to the table and say ‘what’s the grouse?’