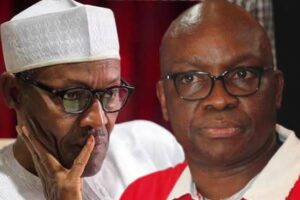 Fayose said Buhari, who could not address his people during a crisis could certainly not be the one tweeting about the crisis.

Buhari had on Tuesday, June 1, 2021, threatened to treat secessionist agitators in the language they understand, while warning them against violent attacks on police stations, prisons, and offices of the Independent National Electoral Commission in the southeast.

He tweeted, “Many of those misbehaving today are too young to be aware of the destruction and loss of lives that occurred during the Nigerian Civil War. Those of us in the fields for 30 months, who went through the war, will treat them in the language they understand.”

The reference to civil war triggered outrage on social media as many Nigerians considered the President’s reference to the 1967 civil war as insensitive.

Subsequently, Buhari’s critics reported the tweet to Twitter and the social media giant took down the part of the tweets where civil war was mentioned.

Reacting to the removal of Buhari’s tweet, Fayose called on Twitter to hold Shehu, Mohammed and other Buhari media aides accountable for the controversial tweet, saying the president is most likely not the one operating his Twitter handle.

Fayose said, “A President who cannot address his own people in time of crisis can certainly not be the one tweeting on the crisis. Twitter should rather hold Garba Shehu, Lie Mohammad and co (others) accountable.

“It is obvious that those using the President’s powers for him do not know when and where to stop their power. Regrettably, Twitter may not know that Buhari is not the one operating the handle.”

Popular Nigerian Pastor Arrested For Fraud In The U.S