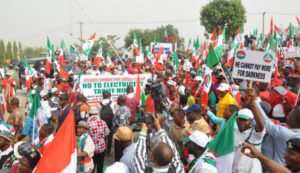 The federal government has called for a meeting, at 7 p.m. today, with labour leaders to avert tomorrow’s scheduled nationwide protest.

The labour unions, NLC and TUC, had fixed the march to protest the recent increase in the prices of petrol and electricity.

The protest is expected to herald a nationwide strike to protest the price increase.

Two earlier meetings held over the matter, including one held last Thursday, were unsuccessful.

After Thursday’s meeting, the next meeting was initially scheduled to hold tomorrow.

The spokesperson of the labour ministry, Charles Akpan, confirmed the Sunday meeting.