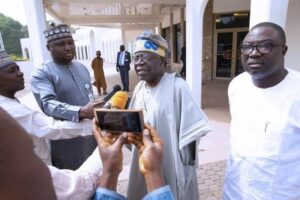 The tension-soaked Edo governorship election may have been concluded with the Independent National Electoral Commission (INEC) announcing Governor Godwin Obaseki as the winner of the poll.

However, one is not unmindful of the fact that the election may not have been completely over as it were. Obaseki’s main challenger, the All Progressives Congress candidate, Pastor Osagie Ize-Iyamu, says he is still studying the result and consulting widely on his next line of action.

This is within his sphere to do.

It is interesting that the Peoples Democratic Party, its candidate, Governor Obaseki, and the Chairman of the party’s Campaign Council for Edo, Rivers State Governor Nyesom Wike, all of who had initially alleged the APC had perfected the rigging of the poll, suddenly turned round, after seeing the results being declared going its way, to say the election was now the best thing to have happened since Nigeria’s independence and that INEC had redeemed its seeming sullen image. Yet, this was the same Wike who had alleged that 300 policemen were deployed to restrict him to his hotel in Benin as part of APC’s plot to rig the election! Is there more the nation needs to know about that election?

Beyond that, however, there are a few remarkable things about the election. One, contrary to the expectation that that poll would be characterised by massive violence, we all have providence to thank for the fact that the election was devoid of any major incident, save for some skirmishes in some areas. The poll was largely peaceful.

The peaceful election may have been helped by the heavy deployment of policemen. Reports had it that over 30,000 policemen aside from some men of the armed forces and officers of other para-military outfits were engaged for the election.

Also, the culture of debate seems to have been further cemented in our electoral process. Both Obaseki and Ize-Iyamu participated in a number of debates where they spoke about their manifestoes and their plans for the people of the state.

It is instructive, however, that whereas both turned up for the Channels Television debate, Obaseki shunned the debate, tagged conversation, put together by ARISE Television to which he had earlier promised attendance.

Of particular note in the days leading to the poll is the broadcast by APC National Leader, Asiwaju Bola Tinubu, where he urged Edo voters to shun Obaseki in the election because of his anti-democratic credential.

The governor, it would be recalled, issued a proclamation inaugurating the state House of Assembly in an ungodly hour, paving the way for nine members to usurp the powers and responsibilities of a 24-member assembly. 14 majority members were shut out and all entreaties to Obaseki to allow room for them to be inaugurated fell on deaf ears.

The opposition PDP and their agents made a heavy weather of Asiwaju’s video on social media.

Now, Asiwaju did not seek to dictate to the people of Edo. He was not out to oust their rights to chose by themselves. He understands so well that widely-held categorization of Edo people, as brilliantly captured by Columnist Segun Ayobolu last week, as “proud, dignified, industrious, culturally and historically self-conscious people not inclined to bowing before mere mortals”.

Far from usurping their power to determine who should govern them, the broadcast was an appeal to the people borne of commitment to democratic principles, clear appreciation of the fundamental role of parliament in a democracy, adherence to the principle of separation of powers, and his irritation by the antic of Governor Obaseki against the 14 lawmakers. It was an appeal for the people to think about the democratic credentials of the candidates in casting their votes.

Obaseki’s anti-peace and reconciliation stance also came out in bold picture in the altercation between him and former APC Chairman and his estranged friend and leader, Comrade Adams Oshiomhole. All appeals to Obaseki to toe the path of peace and allow room for settlement in the matter were arrogantly rebuffed. Asiwaju was in the forefront of some of these peace efforts. Others also intervened all to no avail.

Eventually, one thing led to another and Obaseki, quite unfortunately, failed to scale through the APC screening. He eventually defected to the PDP. There is no evidence that the APC leader was part of that screening process or made input into it.

Indeed, it must be pointed out clearly that beneath all the shenanigans that trailed Edo poll, underneath all of that rabble-rousing, rumour-mongering, campaign of calumny, character assassination, deceit and double-dealing is the matter of 2023. Rather than first helping their party solidify its stronghold and strengthen it for future elections and re-commit themselves to the party’s ideals and principles, the APC chieftains were tearing at the party’s fabric, destroying its foundation and preparing it for eventual disintegration in the name of playing politics of 2023. But like Asiwaju rightly observed, he is but a mere mortal who does not foresee tomorrow. What tomorrow holds, indeed what 2023 holds, is within the province of God Almighty.

Indeed, those who quipped that Edo no be Lagos, apparently referring to former governor Akinwunmi Ambode’s inability to secure a second term, got the context of the two scenarios wrong. Ambode scaled through his party’s screening exercise and participated fully in the direct primaries at which Governor Babajide Sanwo-Olu emerged as the party’s candidate. Indeed, Asiwaju just like Oshiomhole had advocated direct primaries involving all registered members of the party in Edo State to deepen and strengthen the intra-party democratic process. It is on record that Obaseki vehemently canvassed indirect primaries to narrow the extent of membership participation in the primary had he successfully scaled the party’s screening exercise. It is ironical that in a post-election interview, the same Obaseki seeks to impugn Asiwaju and Oshiomhole’s democratic credentials.

With Obaseki firmly in PDP and the battle line drawn for the election, it would be foolhardy to not expect Asiwaju as a leader in the APC to work to advance the cause of his party and the party’s candidate. He is very much unlike some of the other so-called leaders and governors in the same party who paid lip service to party loyalty and ideals and who openly worked against their own party and candidate. In their perverse and illogical world, their party’s victory in Edo would amount to personal defeat for them all because of a blinding 2023 ambition. Those who know him would know that the former Lagos governor has remained consistent and constant in sticking out his neck for his party. For him, the party is supreme. Not one to jump political ship, his political trajectory would reveal he has kept faith with the progressive parties over the years. He invested quality time, energy and resources in the formation of APC and would not want to see it crumble. How ironic it is that some of his traducers have been those known to be hopping on political parties at the snap of a finger, including even the same Governor Obaseki?

Asiwaju’s political background is replete with his fight for the enthronement and entrenchment of democracy in the land even at the risk to his own life. In his first appearance in the Senate in 1992, he played a leading role in the resolution passed by that august body that the military must ensure it handed over to a democratically-elected president after the annulment of June 12 election. Such was his agitation against the military that on one occasion during the darkest days, his house was petrol-bombed by the agents of the military who thought he had been roasted inside. He managed to escape abroad on exile where he continued with the agitation for democracy in Nigeria.

The question can be asked as to who is more of a threat to democracy and democratic practice? The one who stalled all avenues for peace and conflict-resolution and who also later blocked attempts by 14 duly -elected lawmakers from assuming their constitutional seats and performing their responsibilities? Or the other whose only alleged offence is urging the people to enrich democracy by factoring in the anti-democracy backgrounds of the candidates in casting their ballots.

Neither in the days before the election, on Election Day, nor in the days after the Edo poll did Asiwaju step his foot on the soil of that state, contrary to what the evil merchants of fake and hate news would want to have us believe. Yet, the likes of Governors Wike, Aminu Tambuwal, Ifeanyi Okowa and former Anambra State governor Peter Obi were busy traversing the length and breadth of the state on the eve of the election. A few of them, including Governor Wike, were even on ground in Edo on Election Day. For the life of me, are these PDP leaders citizens of and voters in Edo?

Indeed, it must be pointed out clearly that beneath all the shenanigans that trailed Edo poll, underneath all of that rabble-rousing, rumour-mongering, campaign of calumny, character assassination, deceit and double-dealing is the matter of 2023. Rather than first helping their party solidify its stronghold and strengthen it for future elections and re-commit themselves to the party’s ideals and principles, the APC chieftains were tearing at the party’s fabric, destroying its foundation and preparing it for eventual disintegration in the name of playing politics of 2023. But like Asiwaju rightly observed, he is but a mere mortal who does not foresee tomorrow. What tomorrow holds, indeed what 2023 holds, is within the province of God Almighty.