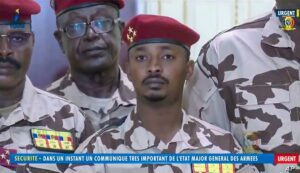 It’s no longer news a four-star general who is a son of Chad’s slain president Idriss Deby Itno will replace him as the head of state.

The newly re-elected President Idriss Déby on Tuesday, 20 April, died of wounds he sustained during a clash with rebel forces.

In a statement by the army’s spokesperson, General Azem Bermandoa Agouna, the slain president’s son, General-Major Mahamat Deby Itno is expected to replace the father as Head of State.

Here are quick facts to know about him:

1. General-Major Mahamat Deby Itno is first enrolled at the Joint Grouping of military schools in Chad.

2. He subsequently received training in France, at the military school of Aix-en-Provence.

3. Upon his return, he was enrolled in second promotion of semi direct of the school of officer inter armed and later was appointed to the service branch for the Security of State Institutions (SERS), as a deputy commander of the groupement of infanterie.

4. His first combat experience took place in April 2006 when rebel attacked the capital city of Chad and later participated in a combat in eastern Chad along with General Abu Bakr al Said, then director of gendarmery, Mahamat was given the rank of major afterward.

5. He led forces when he took part in the command of Chadian forces during the Battle of Am Dam, where his army defeated the rebels.

6. In January 2013, General Mahamat was appointed second in command of the Chadian Special Forces in Mali under general Oumar Bikimo.

7. On 22 February, he led his army against rebels in the Adrar al-Ifoghas mountains in Northern Mali leading to the Battle of al-Ifoghas. They eliminated a rebel base said to be of “significant importance”, inflicting heavy losses upon the rebels but also losing twenty-six men in the process, including Abdel Aziz Hassane Adam, a commander of Special Forces. Mahmud took full command of the FATIM and has since been leading operations against rebels in the North.

8. After his father’s death at the hands of FACT on 20 April 2021, the military said that the elected government and National Assembly have been dissolved and that the Transitional Military Council led by Mahamat will lead the nation for 18 months.