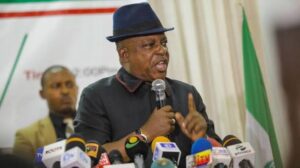 The National Chairman of the Peoples Democratic Party (PDP), Uche Secondus, on Tuesday, described the defection of some of the party’s governors as an effort by the ruling APC to rig the 2023 General Elections.

Mr Secondus’ statement is coming on the heels of the defection of the Zamfara State Governor, Bello Matawalle, after weeks of speculation from different quarters.

In his formal defection on Tuesday in Gusau, the capital of Zamfara, Mr Matawalle was welcomed to the party by 11 governors from the party, the Secretary to the Government of the Federation, Boss Mustapha, and other stakeholders led by Mala Buni-led interim leadership of the APC

The Zamfara governor is the second governor to have left the main opposition in the space of two months and the third in less than 8 months.

He joined the likes of the Cross Rivers State Governor, Ben Ayade, who left the party in May, some months after the exit of his Ebonyi State counterpart, David Umahi, to the APC in November 2020.

However, against the backdrop of the growing cases of defections from the PDP, Mr Secondus, in his address to journalists in Abuja, insisted that the party was ready to return to power in 2023 after kicking the APC out.

He dismissed the possible impacts of the governors’ defection on the party as he hinged its chances in coming general elections on masses whom he said are tired of the President Muhammadu Buhari-led administration.

According to the Vanguard newspaper, the PDP threatened to explore all options to secure the mandate given to it by the Supreme Court as Mr Secondus referred to the Zamfara Governor as a man “who has probably lost memory of how he became governor.”