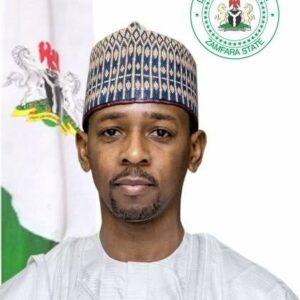 The Deputy Governor of Zamfara State, Mahdi Aliyu, on Wednesday, said he chose to remain in the People Democratic Party (PDP) to honour the mandate given to the party by the Supreme Court.

Mr Aliyu and a member of the House of Representatives declined to join Governor Bello Matswalle and other elected officials in defecting to the All Progressives Congress (APC) on Tuesday.

“Remember how the Supreme Court brought us to power. That’s why I am thankful to God and chose to remain in the PDP,” Mr Aliyu told BBC Hausa Service.

Mr Aliyu, who is a son of a former Minister of Defence, Ali Gusau, opposed moving into the APC, arguing that the apex court awarded the electoral victory in 2019 to the PDP and not just its candidates.

Mr Matawalle announced his defection late evening at the Gusau Trade Fair Complex at an event attended by APC governors, ministers and the Secretary to the Government of the Federation, Boss Mustapha.

‘I was never consulted’

Meanwhile, the deputy governor said he was never consulted about the plan to defect, “and I heard everything as a rumour until by 6:00 pm on 29th June he announced his defection to the ruling APC.

“Since my father brought the party we never for once left the party. They met us in the PDP and they will left (leave) us there,” the deputy governor said.

The deputy governor said the PDP will seek redress in court over the “desertion of its elected officials.”

Mr Aliyu also said he will continue as the deputy governor to serve the four years constitutional mandate given to him.

When asked, Mr Aliyu rulled out being impeached. “That is a big work. I have a good working relationship with the governor, he zends me on important assignments, including PDP governors meetings.

“It’s not a new thing in Nigeria politics for governor and his deputy to belong to different political parties and complete their constitutional mandate together and I hope this too shall come to pass in Zamfara, Mr Aliyu said.

JUST IN: Bandits kill village head, abduct many in kastina