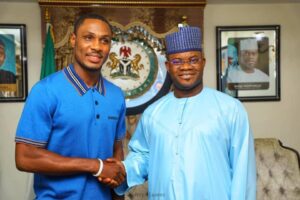 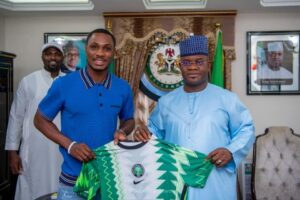 Super Eagles Striker and former Manchester United Forward, Odion Jude Ighalo has described the Governor of Kogi State as a bridge builder and unifier whose leadership style has been a source of hope to the Nigerian youth.

The footballer made the statement while paying courtesy call in the Governor at his Abuja resident on Monday.

He commended the Governor for recognising the efforts, contributions, patriotism of the Ex-Super Eagles players by organising a world class reception for them in Lokoja in March, 2021.

He said such recognitions and honour remained the biggest inspiration to the young athletes who want to represent Nigeria at any level.

While urging other leaders to emulate the Kogi Governor, Odion said Bello has demonstrated the character and quality of a leader who believe in the prosperity of the youth of this country. He commended the Governor for his various projects in Kogi state and appealed to him to continue to speak on behalf of the Nigerian youths.

Bello thanked the Eagle’s player for the visit which he described as heart warming, adding that Odion Ighalo just like every other Nigeria sports person have served the Nation diligently, made the nation proud and brought glory to her

Governor Bello while urging his visitor to continue to play his role in national growth, grass root sport development and other areas of interest, urged that citizens of the country should remain united in the interest of the Nation