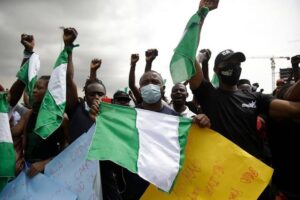 The United States embassy has asked its citizens in Nigeria to avoid potential protest grounds ahead of the June 12 demonstrations being planned by some Nigerian civic groups.

The mission in an advisory posted on its website on Friday noted that such protest locations in Lagos and Abuja would likely have police presence.

“Several groups have announced their intentions to protest nationwide on June 12, Democracy Day,” the advisory read in part.

It added, “Police presence and response can be expected nationwide, including in Abuja where government events are scheduled to celebrate the national holiday and in Lagos where simultaneous protests are planned.

The U.S. embassy then advised American citizens to “avoid the areas of the demonstrations, exercise caution if unexpectedly in the vicinity of large gatherings or protests, monitor local media for updates, and keep a low profile.”

The June 12 protest deliberately planned by civic groups and activists to coincide with Nigeria’s Democracy Day aims to pressure the President Muhammadu Buhari-led administration to address the worsening state of governance and the alarming rate of insecurity in the country.

The federal government and the authorities in various states have indicated their disapproval of the protest.

But civic groups, including the #RevolutionNow movement led by Sahara Reporters publisher, Omoyele Sowore, have insisted that the demonstrations will hold in major cities including Lagos and Abuja.