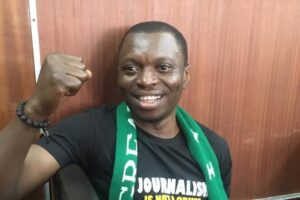 Right activist and newspaper publisher, Agba Jalingo, has been released by the police in Cross River State, Nigeria’s South-south.

Mr Jalingo, the publisher of Cross River Watch, an online newspaper, was arrested earlier on Friday at the police headquarters, Calabar, where he had gone to honour an invitation from the Commissioner of Police in the state, Kayode Sikiru.

The police said they had a petition which accused Mr Jalingo of being an arms dealer.

Mr Jalingo’s lawyer, James Ibor, who confirmed his release, said the accusation was fake and that the petition was intended to prevent his client from mobilising residents for the nationwide June 12 protest in Cross River.

“He was released about 30 minutes ago, he is here with me,” Mr Ibor said.

“They alleged that Agba Jalingo is doing gun running and keeping bombs, and he is mobilising non-Cross Riverians to make Cross River State ungovernable.

“The commissioner of police has agreed with us that the petition was frivolous and not worthy of any investigation and has released him,” he said.

June 12 is celebrated as Democracy Day in Nigeria in honour of the June 12, 1993, presidential election that was won by a popular businessman, Moshood Abiola.

The election, said to be the fairest and freest in Nigeria, was annulled under controversial circumstances by the military regime of Ibrahim Babangida.

Mr Abiola later died under controversial circumstances in detention in 1998 after he was arrested by the military regime for declaring himself president of Nigeria.