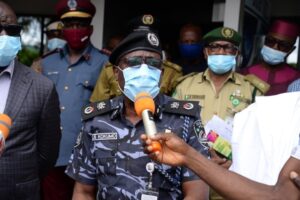 Suspected robbers struck in on Wednesday as a nursing mother was dispossessed of her car on Sokponba Road, Benin City, Edo State.

Sokponba Road and its environs have become the most notorious part of the city in the last two weeks.

On Tuesday, two suspected robbers were burnt by an angry mob on the same road.

Hoodlums, who infiltrated the #EndSARS protesters in the city, had on Monday, October 19, set ablaze three police stations located at Saint Saviour, Ugbekun and Idogbo areas of Upper Sokponba Road in the Ikpoba-Okha Local Government Area of the state.

The arson on the three police stations and four others in the Benin metropolis led to the complete withdrawal of policemen from the streets of the city and other parts of the state.

In the footage of Wednesday’s incident, a man in white native attire was seen bringing out the baby wrapped in a white shawl from the back of the car, while an elderly woman, believed to be the grandmother, stood a few metres away in a confused state.

A member of the gang pushed off the nursing mother, who went on her knees, pleading that she just put to bed.