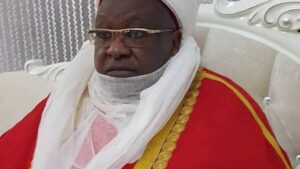 The Sarkin Yakin Katsina, Alhaji Bello Mamman Ifo, told newsmen in Katsina that the district head was found guilty of all the charges leveled against him regarding conspiring with bandits in the area

The Emirate official Spokesman and Sarkin Labarai, Alhaji Ibrahim Iro Bindawa, also confirmed the development, adding that the Emir of Katsina, Alhaji Abdulmuminu Kabir Usman, has since ordered the sacking of the district head.

It is recalled that an Emirate Committee Chaired by the Kauran Katsina and district head of Rimi, had at a meeting with security officials and other stakeholders especially from Kankara district found Alhaji Yusuf Lawal guilty of aiding and siding with bandits and kidnappers operating in his domain.

He was also found guilty of frustrating efforts to tackle banditry and other security challenges in his area.

PFN describes Constitution review as an “exercise in futility”, demands for new Constitution

APC: Consensus Chairman Set To Emerge, Tinubu Might Be Compelled To Step Down Presidential Ambition [Details]