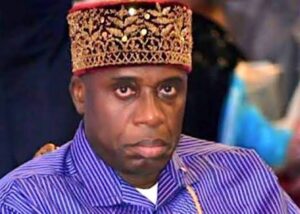 The Minister of Transportation, Rotimi Amaechi has ordered the arrest of buyers of vandalised rail track facilities and other equipment.

Amaechi said cases of vandalisation exists because there are those who have indicated interest in the vandalised facilities.

He also said the rate of vandalisation would reduce if the judiciary system dispenses justice without delay, adding that State Government need to create more jobs.

The Minister disclosed this on Saturday at Ibadan during the inspection of the Lagos-Ibadan railway project.

On the vandalisation of the rail tracks and other facilities, he said: “I don’t know why some Nigerians are like the way they are. I have told the Managing Director of NRC to arrest the buyers of the equipment. It is not enough to arrest the vandals.

“It is likened to those who said why should the National Assembly punish those who pay ransom, that law was first passed by the Rivers State House of Assembly when I was a speaker and the reason is, that, when there is no demand, there will be no supply.

“If we don’t pay ransom, they will be tired and they will stop. The same way, if they don’t buy those metals, slippers and others, nobody will steal them.”

He said: “Also, we must approach the Judiciary to have court that can dispense justice readily so that people are sent to jail early enough to deter others and we will also encourage our governors to create jobs.”

The Minister also hinted that some people who have been vandalising the facilities have been arrested.

Amaechi also said the Lagos-Ibadan project would be commissioned next month after getting approval from the office of the president.

He said: “I hope the Office of the President will approve the commissioning of this project in June. We will communicate the actual date in the next one or two weeks but certainly, I think it is in June.

He also said the e-ticketing platform would be deployed to Lagos-Ibadan route in order to manage the envisaged passenger traffic.

“I have directed the MD of NRC to advertise for the e-ticketing and we hope the traffic that we will witness on this axis will be managed with that platform.”