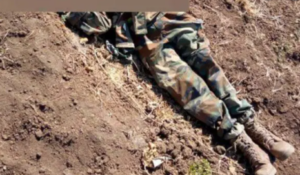 A soldier from Makumire Village under Chief Bota and based at 4.1 Infantry Brigade was killed over a girlfriend at Svuure Shopping Centre in Zaka last week.

Munyaradzi Chikovore is alleged to have been killed by his curvy girlfriend Melody Munyaradzi’s ex-husband Samson Muzivirwa.

Efforts to get a comment from the police where fruitless as Masvingo provincial police spokesperson Inspector Kudakwashe Dhewa said they haven’t received anything concerning the story.

Sources privy to the incident said on the fateful day, Chikovore and Munyaradzi were seated at a Church of Christ building at Svuure Business Center when the latter’s ex-husband arrived.

Muzivirwa is alleged to have attacked his ex-wife first on the head and arm with an iron bar before she escaped and sought refuge nearby.

Sources say Muzivirwa was demanding his lobola back while attacking his ex-wife.

The enraged Muzivirwa is said to have pursued his ex-wife with the intention to attack her further but was restrained by onlookers.

The ex-wife is said to have fled and locked herself in a shop prompting Muzivirwa to go after Chikovore who was ambushed and assaulted by an iron rod accusing him of snatching wife.

The now deceased tried to escape but was pursued and the attack continued.

Chikovore’s body was discovered close to Svuure Business Centre the following morning by villagers who alerted the police.