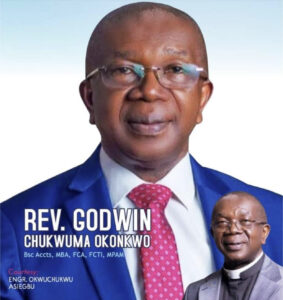 A Reverend of the Anglican Communion and former Managing Director of Nigeria National Petroleum Corporation (NNPC), Reverend Godwin Okonkwo, on Friday, visited Anambra State All Progressive Congress (APC) Secretariat to declare his support for the APC and his ambition to become the next gubernatorial candidate of APC and next governor of Anambra State come November 6, 2021 guber election.

Rev Okonkwo described his intention to contest the next governorship election on the platform of APC as one inspired by the fact that his understanding of the State’s political system and developmental challenges, coupled with his 35 years experience as a retired Director of Accounts and Director of NNPC Capital and other recorded performance across the 181 communities in the state, put him in a better position to manage the affairs of the state and deliver the much-needed dividends of democracy to Ndi Anambra.

He opined that he has the needed administrative experience, the capacity and contacts to take Anambra State to where it ought to be.

He appealed to APC party men and women to make the right decision while choosing the party candidate for the governorship election, they should consider the personality, antecedents and capacity of the individual, reiterating his resolve to bring developments to the people of the state.

Speaking further, Rev. Okonkwo, stated that, should he become the next governor, he will rule the state with the fear of God and he will be firm and just in discharge of his duties as a governor because he has the administrative capacity and political will to bring the much-needed change in the Anambra State.

The guber aspirant said that his administration will reduce the cost of governance to its bearest minimum and make community development a priority. He will reduce the era of borrowing in the state, the right person with the right contacts will surely attract international donors and grand for the state instead of going on borrowing.

He noted that for APC as a national party, to take over power from Willie Obiano, All Progressive Grand Alliance, (APGA)-led government, they must choose a candidate like himself, (Reverend Godwin Okonkwo) who is on the ground and has impacted the lives of many in the state. He urged party leaders and delegates to choose a candidate whose capacity is well established.

Speakers at the Events expressed their Joy with the visit. They maintained that this is the first time a Clergyman is coming out to contest for governor in Anambra State and it is in APC. They thanked him for taking a bold step.

In his remark and opening speech, the State Chairman of the party, Chief Basil Ejidike, on behalf of other members of the State Working Committee while welcoming Reverend Godwin Okonkwo and his entourage, maintained that APC will conduct free, fair and credible primary for the party. He promised that the party will be firm and just to all aspirants.

Rev. Okonkwo also donated a Sienna vehicle to the state chapter of the party for the electoral activities.

Among the dignitaries that accompanied him for the visit were Honourable Uche Ufearoh (former Aspirant, APC National auditor), many Reverends of Anglican Communion, among other party supporters.