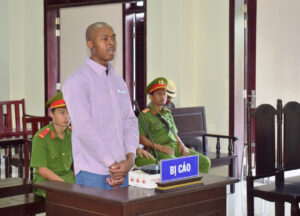 A 25-year-old Nigerian, Unachukwu Chiluba Paulinus, has been sentenced to death by a Vietnamese court for transporting nearly three kilograms of narcotics from Cambodia into Vietnam.

The People’s Court in the southern province of Tay Ninh, on Tuesday, heard how police and border guard officers caught the Nigerian national red-handed carrying 2.997 kilograms of methamphetamine on February 19, 2020.

According to reports from the Asian county, Paulinus confessed to the police that he had become acquainted with an unidentified man in Cambodia, who hired him to transport narcotics from Cambodia to Ho Chi Minh City for $2,000.

After receiving $650 in advance, he caught a cab from Phnom Penh to the Cambodia-Vietnam border.

He crossed the border illegally before being detected by officers in Ben Cau District, Tay Ninh Province.

The Nigerian added he had successfully transported a backpack containing unknown items from Cambodia to Ho Chi Minh City on February 8, 2020.

Paulinus was given the death penalty for the illegal transport of drugs.