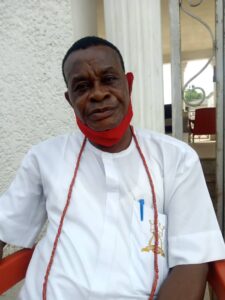 The newly appointed traditional head /Okao of Iguobazuwa, in Ovia South West Local Government Area of Edo state, Chief Friday Obaruyi has stated that his confirmation as the traditional leaders of Iguobazuwa was to foster the Benin traditional value and custom in the community.

He also added there was no time that his title, ‘ the Okao of Iguobazuwa ‘ was in conflict or contention with the title of the Odionwere adding that the Okao title was given to him by the respected Benin Monarch.

Making clarification as to what led to the crisis in Iguobazuwa, Obaruyi in a chat with newsmen in Benin City, Edo state alleged that the suspended Odionwere and others had abused all traditional rites and mismanaged the fortune of Iguobazuwa.

In his words: “ On the 10th 0f October , 2019 we, the concern people of Iguobazuwa came to the palace of the Oba to report the case of mismanagement of fund, abuse of traditional process and many other atrocities being committed by one Pa Sunday Omokao who was the second in command to the late Odionwere Pa Omorogbe Imeogbon.

“The men claiming to be the number 3, 4 Pa Sunday Omokaro, Pa Peter Idehen, Mr Edward Edoghayobare and Mr Joseph Iguaavon stand suspended and thereafter the Oba mandated me and other loyal elders that were not affected by the suspension to go and take charge. After that there were a series of protests that they were not going to allow what the palace has decreed to stand”.

“I told them pointedly that it was an abomination to go against what the Oba said and they continue with the atrocities and abomination. Since then they refuse to comply with the suspension order of the palace. Someone who is on suspension went into the land of the Oba in Iguobazuwa community.

“They went as far as installing a woman as the Osa deity in my community which has never happened before. This is the remote and immediate cause of this problem until finally by December 2020; the Oba finally conferred my title as the Okao /traditional head of Iguobazuwa community”

Cemetery Where At Least 10 Infants Are Buried Daily in Gombe