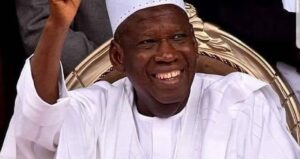 KANO State Governor, Abdullahi Ganduje, has said about four million people have so far registered as members of the All Progressives Congress in the ongoing membership registration /re-validation exercise in the State.

This was contained in a press statement signed by the Chief Press Secretary to the Governor, Abba Anwar, in Kano on Monday. He quoted the governor as saying this during the Sixth APC Stakeholders meeting, in Kano.

The statement quoted Ganduje, as saying, “The registration of members has hit between three and four million members, as the state has already exhausted all the registration slips, issued to the state and is expecting more from the APC headquarters.”