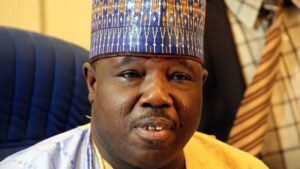 A former Chairman of the Peoples Democratic Party, Senator Ali Sheriff, on Saturday declared his readiness to run for the chairmanship of All Progressives Congress if the position is zoned to the North-East.

Sheriff, who was sighted with the Yobe State Governor, Alhaji Mai-Mala Buni, at Buni Gari during the Yobe State local government election on Saturday, said, “In the APC, we have respect for the constitution of our great party, and if the position of the National Chairman is zoned to the North-East where I come from, I will contest, God willing.”

Sheriff, who was the governor of Borno State between 2003 and 2011, had after losing out as Chairman of the PDP returned to the APC, of which he was a pioneer member.

Sheriff’s presence at Buni’s polling unit to lend moral support might be an indication that he is looking for the support of the Yobe State governor, who is also the Chairman of the APC Extraordinary/Convention Planning Committee.

Speaking at the polling unit, Sheriff expressed optimism that the APC candidates would emerge victorious in the polls across the state.

After casting his vote, Buni commended the orderly, peaceful and transparent manner in which the election was held in all parts of the state.

Buni, who cast his vote at about 1.15pm on Saturday at Bulturi Yerimari Lewa Gate Code 004, Buni Gari, his hometown in Gujba Local Government Area, said the success of the exercise in Buni Gari and other parts of the 178 wards across the 17 local government areas of the state showed that peace had returned to the state.

According to the governor, this will strengthen the people’s confidence in the local government administration in the state.

He commended the Yobe State Independent Electoral Commission and its Executive Secretary, Dr Mamman Mohammed, for their preparedness and the high standards maintained in the conduct of the exercise, urging them to sustain the tempo.

Just In: FG to sell crude oil in Naira to $15bn-Dangote Refinery

Emir of Lafiagi Dies At 86, after 45 years on Throne