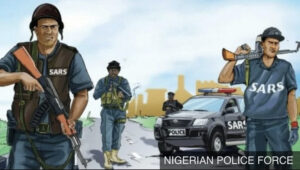 Benson Obodeh, 26, was reportedly arrested at his home on May 21, 2015 and same day after his arrest, the news of his death filtered in, after he was suspected to have undergone a subjected torture that led to his death.

Investigation had revealed that the police took the suspect’s ATM card; after forcefully obtained his pin number before his death and withdrew N330,000 from his account within four days, leaving a balance of N1,754.15.

At the time, the former Police Public Relations Officer, Lagos State Command, Kenneth Nwosu, had lied that the death of Benson occurred as a result of mob attack when he was arrested by neighbours in Benin.

“It was a case of mob action and the police had to rescue him, on the way to the hospital, he died and the corpse has been deposited at the mortuary in Benin City. We are investigating the circumstances that led to his death as well as the result of the autopsy. What I can tell you now is that he was an armed robber,” DSP Nwosu explained.

However, his family were able to trace his corpse to the Specialist Hospital, Benin, where it was discovered that one Corporal Oniya Musa deposited his remains with the name: “Agwu instead of Benson Obodeh.

Autopsy later revealed that he was tortured and eventually died from injury sustained leading to heart and kidney failure. The Government of Edo State has since launched manhunt for the other fleeing policemen.