...As he dedicates Award to Gov Uzodimma 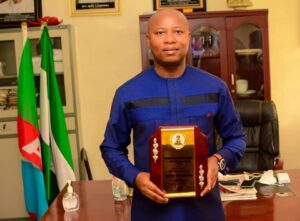 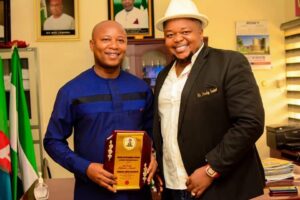 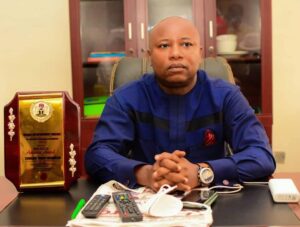 The Imo State Commissioner for Commerce and Industry, Comrade Simon Ebegbulem has been bestowed with the Award as best Commissioner in the state Executive Council by Global Entertainment International.

He thanked the organizers of the award for the recognition and went further to dedicate the award to his Excellency Sen. Hope Uzodimma. Attributing this achievement to the Governor who in his words has made it possible for the youths to showcase their talents by including the youths in his administration.

‘I want to dedicate this award to his Excellency Sen. Hope Uzodimma who has made it possible for some of us to show our talents and at least tell the world what we can do. Particularly in the aspect of empowering the youth. His Excellency has brought in youths in his administration because he believes so much in the youths, because he believes the youths are the future of this country, the future of the world. He has given us this wonderful opportunity to excel and by the grace of God, we are doing well.

He further applauded the Governor for his groundbreaking achievements in just one year and paving the way for commerce to thrive in the state by making Imo state a conducive environment for investment which has in turn spurred the interest of investors who are now trooping to the state.

He added that the Governor is revamping & reviving all the money fetching industries such as the Nsu Tiles, Umuogu Palm Oil Factory, Ezinnachi Tiles etc. This move he said is to create employment opportunities in the State.

Finally, he assured the people of Imo state that in no time, they’ll will start reaping the dividends of democracy as Governor Hope Uzodimma is dedicated to the growth of Imo State.