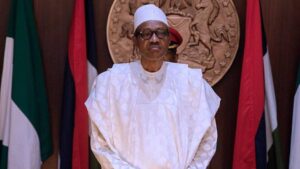 The Nigerian Bar Association (NBA) has dragged President Muhammadu Buhari to court over the tenure elongation of the Inspector General of Police, IGP, Mohammed Adamu.

NBA filed a suit before a Lagos High Court challenging Buhari’s decision to extend the tenure of Adamu.

Adamu had in February attained the retirement age after clicking 35 years in service, but the president had extended his tenure.

However, the Public Interest Litigation Committee of the NBA sought a court order asking Adamu to vacate office.

The lawyers argued that Adamu’s continuous stay in office is in contravention of the provisions of section 215(1)(a) of the constitution.

The NBA sought an order “setting aside the purported elongation of the tenure” of the IGP.

“An order directing the 3rd Defendant to vacate forthwith the office of the Inspector General of Police and refund all salaries, allowances and benefits received from February 1, 2021, (when he retired from the Police Force) to the coffers of the Federal Government of Nigeria”, the suit read.

Commenting on the suit, Olumide Akpata, NBA president, said the action was taken due to the body’s motto of promoting the rule of law.