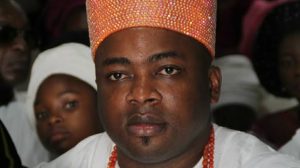 His Royal Majesty, Oba Saheed Elegushi of Ikate Kingdom and his household have been thrown into mourning after losing his only son.

Kemi Filani recalls that the Oba and his second wife, Hadiza, welcomed a baby boy, the first son of the monarch in August 2020.

The crown prince, who recently clocked a year and seven months old is the only son of the Oba and his second wife, Queen Hadiza Elegushi, nee Tanko.

This is sad news for the Ikate Kingdom as the late prince was the heir apparent to the Elegushi throne.

Last year, His Royal Majesty, Oba Saheed Elegushi took to his Instagram to eulogize his first wife, Sekinat on their 18th wedding anniversary today, the 24th of May.

According to the King, Sekinat remains his queen forever because their union is unique and he is grateful to her for all she does.

“My friend from the beginning, my wife later, and My Queen forever. It’s 18years of bliss and glory to glory. Ours is a union in its uniqueness; it is the reason we’ve to flourish together and our wonderful fruits are our testament. 18years today; forever to go…Happy Wedding Anniversary, My Queen, My Dearest Wife, the chief strategist, and our master planner! Thanks for all you do…”