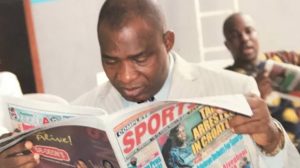 A representative of the family, Mr Julius Ojeagbase, announced the veteran journalist’s death in a statement on Monday.

The statement noted that Ojeagbase died on Saturday, February 26, 2022, in Atlanta, the United States of America after a brief illness.

Popularly known as Sunny Ojeagbase (or simply “S.O.”) before he added Emmanuel to his name, the late media entrepreneur broke into the national consciousness as the pioneer publisher of sports news in Nigeria when he established Sports Souvenir weekly newspaper in 1984.

Before then, he was a retired soldier of the Nigerian Army who cut his teeth in sports journalism as a stringer at the Daily Times newspapers in the mid-1970s. Through sheer talent, determination, and hard work, Ojeagbase blossomed very quickly and was appointed sports editor of Sunday Concord newspapers at inception in 1980 and sports editor of The Guardian newspapers also at inception in 1983. He resigned from The Guardian in 1984 to pursue his dream as an entrepreneur.

Ojeagbase is survived by his wife, Pastor (Mrs) Esther Ojeagbase, children as well as grandchildren and other relatives.

“Burial arrangements will be announced by the family,” the statement added.

JUST IN: PDP chieftain to quit party over Atiku’s choice of Okowa as running mate