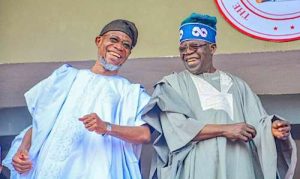 Rauf Aregbesola, minister of interior, and Bola Ahmed Tinubu, a chieftain of the All Progressives Congress (APC), are set to reconcile in the coming days — after being at loggerheads for the last couple of years.

Both politicians have agreed to sheathe their swords and work together ahead of the Osun state governorship election and the 2023 presidential poll.

Tinubu has expressed his interest in vying for the highest office in the land, but first, he has to secure the ticket of the APC.

The reunion of the one-time “political brothers” is expected to be witnessed by south-west traditional rulers and prominent members of the Muslim community.

“A reconciliation has been fixed. There are two layers to it: one is with traditional rulers and another one is with the Muslim communities,” a reliable source said

The reconciliation meeting is scheduled to take place between Tuesday, March 1 and Wednesday, March 2. Several stakeholders in south-west politics are expected to be in attendance at the meeting.

Another insider said that the truce was arranged by stakeholders “to ensure justice and fairness for all, in the overall interest of the Yoruba and the APC”.

“The reconciliation is basically towards ensuring that the APC is victorious in Osun and for the greater goal of Yoruba land,” the source added.

“They are both open to it and are looking forward to it.”

ORIGIN OF THE RIFT

The cracks in Aregbesola and Tinubu’s relationship became noticeable in May 2020, when Aregbesola revamped the Mandate Group — a core of Tinubu’s loyalists — and usurped the closely-knitted caucus for individuals he could trust.

The former Osun governor sanctioned the relaunch without Tinubu’s approval, naming Abdullahi Enilolobo, his protege from Alimosho LGA, as the new leader, while he remained the grand patron of the group.

A subsequent communique signed by 27 party chieftains, who are members of the Governor’s Advisory Council (GAC), had disbanded and prohibited all factions like Justice Group and Mandate Group.

The then-brewing rift between Aregbesola and Tinubu was worsened by Gboyega Oyetola’s actions as the governor of Osun.

Although Oyetola served as chief of staff to Aregbesola during his tenure as Osun governor, he is related to Tinubu and more loyal to the former Lagos state governor.

Upon assuming office, Oyetola reversed some of the decisions taken during the Aregbesola administration.

A few days to the Osun APC gubernatorial primary election, Aregbesola tore into Tinubu during a campaign event for Moshood Adeoti, his anointed candidate for the ticket.

The minister had said Tinubu was exalted “beyond his status, and he turned himself to a god over us”.

Aregbesola added that Oyetola would be ousted from office for failing to stick to the plan that would make Osun prosperous.

But the minister’s camp was trounced in the primary, with his favoured aspirant unable to defeat the incumbent governor.

Adeoti came a distant second with 12,921 votes as Oyetola polled 222,169 to emerge as the APC flagbearer for the July 16 governorship election.