DPO Dismissed For Drug Offenses Arrested With 280 Blocks Of Cannabis 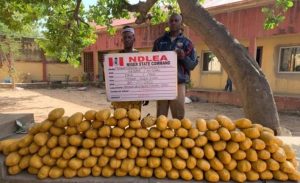 A former Divisional Police Officer of Idanre Police Station in Ondo State, who was dismissed from service for drug offences, Monday George Chika, has again been arrested for drug possession.

This was revealed in a statement issued by the Director of Media and Advocacy of the NDLEA, Femi Babafemi, on Sunday.

According to available information, the dismissed Police Officer, who is 64 years old, was arrested with an accomplice, Emmanuel Eniola, 40, with 280 blocks of compressed cannabis weighing 168kg.

They were arrested on January 30 in Mokwa, Niger State.

This was after their Toyota Avalon car, marked: EKY 429 BZ Lagos, loaded with the substance at Idanre and heading to Kanji, Borgu area of the state, was intercepted.