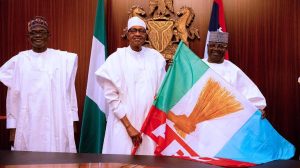 The Senator representing Taraba South Senatorial District in the red chamber, Emmanuel Bwacha, said he left the Peoples Democratic Party for the All Progressives Congress to escape the “apparent persecution” of the state governor, Darius Ishaku.

Bwacha, who was until his defection on Thursday, the Senate Deputy Minority Leader, also said the PDP as a national party didn’t offend him but his grouse was with the leadership of the party in Taraba.

The lawmaker lamented “deliberate isolation from the governor”, adding that the dispute between himself and the governor was not from his part.

“I actually cannot point out exactly what is his (Ishaku’s) problem with me,” he said, adding that the governor barred public officials from attending his constituency projects and his other political activities.

“We (Ishaku and I) worked together in 2015 but in 2019, suddenly this hate came. I tried to speak to him about issues but it had always earned me hate. I tried to see him at a point but he shut the door at me,” the Senator said, adding that past and present leadership of the PDP didn’t help reconciliatory efforts.

Bwacha further alleged that Ishaku did all he could to ensure he didn’t return to the Senate in 2019, and that the governor has also been against his political progress.

He said, “I have not made public declaration about becoming a governor but there have been innuendos, and insinuations. People have also been putting pressure on me to run for governor. And I overheard someone say that the only condition for me to sit with him (Ishaku) is if I would drop my gubernatorial ambition.”

Bwacha said the governor was wrong to have made the condition for them to reconcile one based on his dropping any political ambition.

He said his defection is not about winning an election. “It is about an environment where you are not being persecuted, where you are given a latitude to operate, a free playing ground.

“My people are not in support of such persecution, they see me going through persecution that is unnecessary,” he noted.

Why we are yet to declare bandits as terrorists – Defense Minister