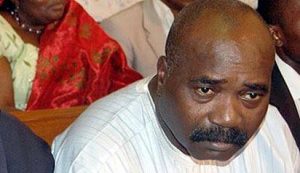 Detained former governor of Edo State, Lucky Nosakhare Igbinedion, who is currently facing money laundering charges at the Federal High Court, Enugu, has lost his mother, Erhiedola Igbinedion (nee Agho Onah). Erhiedola, P.M.News gathered this morning, died night shortly after her only son for Sir Gabriel Igbinedion, the Esama of Benin, was dragged to court on a 147-count charge of alleged misappropriation of funds belonging to Edo State.

Investigations revealed that the late Erhiedola, was the first wife of Sir Igbinedion and they divorced after the birth of Lucky. She later married another man for whom she had other children.

The late Erhiedola, sources said, died of trauma following the arrest and arraignment of her son in court by the EFCC.

She was said to have made several efforts to speak with Lucky shortly before he was detained on the order of the court but to no avail.

A Bill For An Act To Provide For The Establishment Of The Federal School Of Nursing & Midwifery, Sobe, Edo State; and For Related Matters Sponsored By Prof. Ihonvbere Passes Second Reading

Popular Nigerian car dealer arrested for money laundering in the US