Why Couples Should Undergo Drug Test Before Marriage – NDLEA Boss 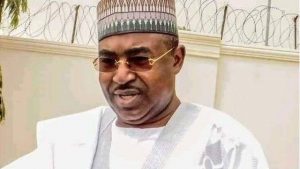 He made the proposal at the public presentation of “Legacies of a Legend”, a book on Ambassador Bamanga Tukur.

The NDLEA CEO advised parents to insist on drugs test before giving out their daughters in marriage.

“I must take advantage of this audience. Please, how many of you will like your daughters to marry drug addicts? Raise your hands.”

“Before wedding, we always do HIV test; we do genotype test. I appeal to you, please, let also have a drug test before wedding,” he said.

At the event, President Muhammadu Buhari said debts incurred by African countries prior to the cancellation for 32 countries in 2005 were not channeled into appropriate economic goods and services that could bring the much needed growth.

Buhari, who was represented at the occasion by his Chief of Staff Professor Ibrahim Gambari, said debt, if properly contracted and utilised effectively, was an important instrument in the economic blueprint of a government in its policy making sphere.

He expressed the determination of the President to execute the landmark projects before leaving office and ensure that infrastructure gap of Nigeria which was widened was reduced considerably.

He said: “During the latter part of my engagement there (UN), I recalled Bamanga Tukur’s activities with Tony Blair led Commission for Africa in 2004/2005 and how that led to the 2005 G8 Summit landmark decision on debt cancellation for 32 African countries.

“Prior to that, many poor African countries were using large portion of their little resources to service debt obligations.

“The benefits of debt cancellation was that many African countries were then able to free up resources which they previously channeled into debt servicing and deployed them into socio-economic and infrastructural projects.

“That explained the fact that shortly after, the fastest growing economy was from Africa which perfectly fuelled Africa’s rising narrative. To my mind, much credits are not yet given to the role played by Alhaji Bamanga Tukur in

the process. We must recognize that now.”
The Minister of the Federal Capital Territory (FCT), Malam Mohammed Musa Bello, who spoke glowingly about Alhaji Tukur, recalled that he and his father bought the first car for him at the cost of N9,000.

The Secretary to the Government of the Federation (SGF), Boss Mustapha, said as the Governor of Old Gongola State, he (Tukur) demonstrated that this country could remain as an indivisible entity with the appointment of Chief Raymond Dokpesi as Chief of Staff.

He said the former General Manager of the Nigeria Port Authority (NPA) remained an epitome of what Nigeria should be as he could have made the man from Old Bendel State as Secretary to the State Government (SSG) by the way he was going at that period without bordering about his State, tribe, or creed.