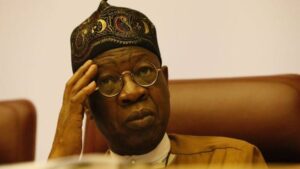 Members of the Kwara State House of Assembly yesterday said Minister of Information and Culture Lai Mohammed did not sponsor their 2019 general elections campaign.

They described as baseless and unfounded, a claim by the minister that he funded the election of members of the state’s 9th legislature.

They said the only individual who could claim offering the members massive support during the election was Governor AbdulRahman AbdulRazaq, who was the APC governorship candidate at the time.

Speaker of the House Yakubu Danladi-Salihu told reporters I in Ilorin, the Kwara State capital, that the minister did not in any form support the then APC House of Assembly candidates during the campaigns and election.

Salihu, who was represented by Deputy Speaker of the House Raphael Adetiba, explained that Alhaji Lai Mohammed was nowhere to be found at every point of the campaigns and election that produced the Ninth Legislature, hence his claim to have personally funded their election is farther from the truth.

“We ordinarily should have ignored the minister and took it as another lie from Lai Mohammed, but for the unsuspecting members of the public and posterity, the record needs to be set straight,” he said, flanked by several members of the Assembly.

“Lai Mohammed did not give any support in any form to members of the 9th legislature during the campaign and election; if he did, he should name who and what he gave out. Could the minister be mixing things up on account of his old age?”

Also, House of Representatives member AbdulRaheem Tunji Olawuyi described as frivolous, baseless and wild allegation of embezzling N70 million from the 2018 by-election campaign fund leveled against him by the minister.

He said such allegation only exists in the imagination of the minister, while accusing Mohammed of being economical with the truth, petty and resorting to politics of pull him down.

Why We Are Yet To Declare Bandits As Terrorists — FG