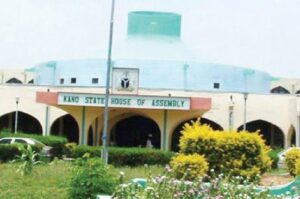 Kano State House of Assembly has suspended the chairman, Kano State Public Complaint and Anti-Corruption Commission, Muhyi Magaji Rimingado for rejecting an accountant sent to its agency by the office of the Accountant-General of the state.

The Speaker, Hamisu Chidari announced the suspension at the Assembly’s plenary session on Monday.

The suspension followed a letter of complaint against Rimingado sent to the house by office of the Accountant-General of Kano state.

The letter also revealed that the chairman appointed a grade level 4 as an accountant of the commission which is contrary to the state act.

The house however suspended the anti-corruption chairman for one month and directed the house Committee on Anti-corruption to investigate the matter and submit its report in the next two weeks.

Recall that unconfirmed reports making rounds in the state few days ago have it that there are plots to remove the chairman, antigraft agency, Rimingado for allegedly stepping on toes of powers that be in the state.

Sad: Many Killed As Gunmen Open Fire On Travellers In Jos