BREAKING: I was never arrested at Guru Maharaji’s place, I’m in my house at Ibadan – Sunday Igboho 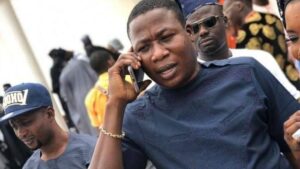 Acclaimed Yoruba freedom fighter, Sunday Adeyemo Igboho has disclosed that he is currently in his house at Ibadan, the Oyo State capital.

The DSS had declared Sunday Igboho wanted after it allegedly recovered arms and ammunitions from his Soka, Ibadan residence on Thursday.

Consequently, the DSS told Sunday Igboho to surrender himself to any nearest security agency or the law will catch up with him sooner or later.

On Friday evening, there were rumours that the Oyo indigene has been arrested by security agents.

Debunking the rumour, Sunday Igboho spoke through a phone call on a live Facebook video hosted by his spokesperson, Olayomi Koiki.

Adeyemo explained that he heard the rumour of his arrest, saying it was not true.

“I want to appreciate God and all my fans throughout the world. Today is July 2, 2021. I heard about the rumour that Sunday Igboho has been arrested at Guru Maharaji place. There is nothing like that. I am not at Guru. I am in my house at Ibadan. Thank you,” Sunday Igboho said.