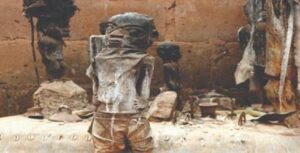 governorship aspirant, Dr. Mathias Ichoku, has threaten to sue a political party, known as National Rescue Movement (NRM) and its leadership before the deadly Okija shrine, for selling fake guber interest/nomination form to him as a sole candidate, in the forthcoming November 6th 2021 Anambra governorship election.

He called on the Independent National Electoral Commission (INEC), to de-register the party, alleging that the party engaged in fraudulent practices.

He also urged Nigerians who are card carrying members of the party to work with care.

Dr. Ichoku, who spoke to some newsmen shortly after he was disqualified as the sole candidate of NRM, at the party’s primary election which held at Best Western Meloc Hotel, Awka, on July 1, 2021, having 64 party delegates from the 21 local government areas of the state.

According to Ichoku, the quest to be the youngest governor of Anambra State led him into NRM through internet.

In his words; I came across the contact address of the party National Secretariat Abuja, through browsing. I was told that the interest /nomination forms for Anambra guber polls were sold for 200,000 and 250,000 naira each. So I was happy to be the next governor under the party platform.

Then I travelled down to Abuja, where I made the party’s National Publicity Secretary, Barrister Chinedu Obidike, that informed me that the forms are sold at the above-mentioned prices and that I would be made sole candidate of the party in the election.

“Barrister Obidike sweet-mouthly told me that I will single-handedly sponsor the party electioneering activities in Anambra State because the party has no money, office and structure in the state, in which I excellently agreed.

“But to my greatest surprise on the scheduled day for the primary, at the above address in Awka, I was told by the State Chairman of the party, Mr. Nze Nwama Unachukwu, that I was not qualified to contest the primary election because the original guber form for the party was sold at the rate of #300,000 and #350,000 naira respectively and that my membership in the party has not matured for the number one seat in Anambra Government House.”

He said ever since the electoral process started, he has spent over N1million including the National party officials flight ticket from Abuja to Anambra and their food, hotel bills, all for the process.

“As I speak to you journalists now, I am disorganised. I don’t know what to do,” Ichoku lamented.

“I am calling on the NRM to fulfil their promise by making me the governorship candidate or return my money, else, I will have no option then to sue the party to court or Okija shrine,” he threatened.

The State Chairman of NRM, Mr. Nwama Unachukwu, maintained that Dr Ichoku was disqualified for being arrogant and for being a new member of the party.

But in his swift defense, the National Publicity Secretary of the party, Barrister Obidike, denied all the allegation, saying it was the decision of the National Executive Council (NEC) of the party to disqualify Ichoku over his desperation to emerge the party candidate by all means.

“Because, he wants to get it by all means, he brought into the venue thugs and practically harassed our national organising secretary, Onowu Nwafor Orizu and other leaders of the party.

“Dr. Ichoku joined the party, one week before the primary and he thought he will emerge the sole candidate, without knowing that the party have other aspirants vying for the position,” Obidike explained.

“NRM with about ninety practising lawyers as members believes in transparency and equal rights for all card-carrying members. So, the party, being among the recognised political parties in Nigeria did not have or sell fake forms to any Anambra governorship aspirants.

“I want to use the medium to appeal to Dr. Ichoku to accept the party’s decision and work for the victory of the party, come November 6th 2021,” Obidike pleaded.

Don’t pay women after sleeping with them, you work harder and they enjoy it – Lady tells men

Don’t pay women after sleeping with them, you work harder and they enjoy it – Lady tells men