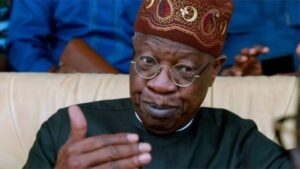 The Federal Government has justified its action of indefinite suspension of Twitter by giving insights into the several attempts by the microblogging and social networking site to destabilise the country.

Minister of Information and Culture, Alhaji Lai Mohammed, gave the details on Friday when he featured on a live programme of the Nigerian Television Authority (NTA), `Good Morning Nigeria’.

During the programme, the minister said that Twitter had become a platform of choice for separatists to carry out their agenda.

Specifically, the minister said the platform was used consistently to promote activities that would lead to the collapse of the country.

He said Independent People of Biafra (IPOB) leader, Nnamdi Kanu, who stays comfortably in Europe, had been using Twitter to direct people to attack the symbols of Nigeria’s sovereignty.

The minister said Kanu used that platform to direct his supporters to attack policemen, military men, barracks, INEC offices, among others.

“Before its suspension, we made several pleas to them to remove the tweets where Nigeria is described as a zoo where all of us are described as monkeys.

“We also pleaded with Twitter to delete the tweet where he said that if a Nigerian soldier enters into Biafra, it is death,” he said.

“Twitter, however, said that those tweets did not offend their own rules.

“It gets out of hand when attacks on police and military formations, police and army officers became unabated and we said at this point, we will need to suspend their operations,” he said

Mohammed added that the mission of Twitter and its founder, Jack Dorsey, was suspect as they sponsored the EndSARS protest which almost destabilised the country and led to the death of many, including destruction of public and private properties.

He said when he asserted that Twitter funded the EndSARS protest, his position was corroborated by the fact checks made by an online media outfit, ‘The Cable’.

“The online media concluded that on October 14, 2020, Dorsey actually retweeted some of the posts by some of the coalitions supporting the EndSARS protest.

“On the same day, he launched a fundraising asking people to donate via Bitcoins.

On October 16, 2020, Dorsey launched another Emoji to make the EndSARS protest visible on the microblogging site.

“On October 20, 2020, he retweeted the tweets of some foreign and local supporters of EndSARS,” he said.

The minister said his claims were proven rightly by the investigations of the Cable, including the fact that Twitter founder solicited donations to support EndSARS.

“If you ask people to donate money via bitcoins for EndSARS protesters, then you are vicariously liable for whatever is the outcome of the protest.

“We have forgotten that EndSARS led to the loss of lives, including 37 policemen, six soldiers, 57 civilians while property worth billions of naira were destroyed.

“Over 164 police vehicles and 134 police stations were razed to the ground, 265 private corporate organisation were looted while 243 public property were looted.

“Over 81 warehouses were looted and we are now saying we don’t have a reason to ban twitter,” he added.

The minister said it was unfair to conclude that the operation of Twitter was suspended indefinitely because it deleted President Muhammadu Buhari’s tweet.

He said the government was unambiguous that the action was taken because the platform was being used to promote the views of those who want the country to be divided.

On the timing of the suspension, the minister said the government had the right to determine when and where to make pronouncement on policy and action affecting the corporate existence of the country.