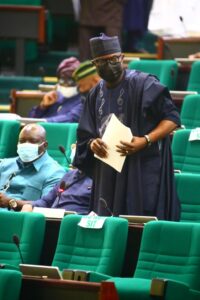 The lawmaker representing Ovia Federal Constituency, Hon Dennis Idahosa (APC – Edo), says no fewer than 100,000 farm families and businesses will be imparted if the Upper Siluko road is reconstructed by the Federal Government.

It was reported that the Chairman House Committee on Legislative Compliance, stated in Benin on Thursday while fielding questions from newsmen.

He said the road that have been deplorable for years now, have hampered development in the federal constituency and by extension, Edo.

He stressed that the road is now a haven for kidnappers and other criminal elements to thrive in their activities because of its deplorable state.

“It was to the effect to see growth and development in the area and boost farming and businesses that informed my decision to move a motion in the floor of the House for the construction of the road.

“The importance of the Upper Siluko road in Edo State is such that it links Ogbese to Ondo State and other States in the country and also serves as an alternative route for commuters who are predominantly farmers in the transportation of their produce and services.

“As the representative of the people, I am particularly concerned that for long, the road which is in a deplorable state has been causing untold hardship to users, leading to loss of revenues, man hours and destruction of perishable goods.

“If constructed, the road will boost economic activities in the area and the country as a whole, as well as reduce crime rate and accidents.

“This is why I urge the Federal Ministry of Works and Housing to commence re-construction of Upper Siluko Road in Edo State through Ogbese to Ondo state,” Idahosa stated.

APC clears man indicted of fraud in U.S. for House of Assembly election in Edo [PHOTO]