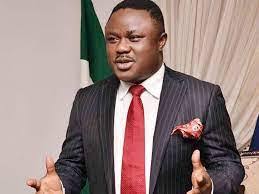 The Cross River State Council of Traditional Rulers has thrown its weight behind Governor Ben Ayade who recently defected from the Peoples Democratic Party (PDP) to the All Progressives Congress (APC).

The traditional rulers, led by their Chairman and paramount ruler of Bakassi, tinyin Etim Okon Edet, who spoke at the Governor’s Office, Calabar, during a courtesy visit to the governor, told Ayade that his defection had spiritual undertone.

“We are here today to meet with you and to tell you our mind, that for the past three weeks or so, a lot has happened in the state which we describe as spiritual development beyond human and political comprehension. Only those with third eyes will see it,” Edet said.

According to him, the support of the council for Ayade’s defection was because “past governors of this state have always admonished us to follow the leader and in this state, the leader is the governor. So nobody should tell us otherwise now that it is Ayade’s turn.

“Therefore we must follow Ayade because we know that your thoughts towards Cross River State are of good and not evil, you will lead us to a successful end.”

The monarchs commended Ayade for opening up Cross River’s political landscape by bringing young people into government and urged the people of the state, including past governors, to join hands with him “to bring good things to Cross River.”

Responding, Ayade thanked the monarchs for their support at all times and enjoyed them to do more.

He reiterated his reason for defecting to the APC which was to take Cross River to the centre for the overall economic and infrastructural benefit of the state.

Nigerians can now travel across 160 countries without Visa – Agency [Details]

Suspect Arrested With Human Head In Ondo Dies In Hospital