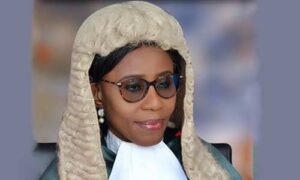 At the Ceremonial Hall of the Edo State High Court of Justice Complex on Monday the 17th of May,2021,Persons from all walks of life shall gather to give My Lord ,the Honourable Justice Esther Amenaghamwon Edigin, FICMC, FNIARB, CJ, the out going Chief Judge of Edo State, a historic valedictory Court Session as My Lord Retires as the Chief Judge of Edo State , having attained the mandatory age of retirement of 65 Years .

The Journey to the nadir of My Lord’s glorious Sojourn in the Judiciary began with My Lord’s call to the Nigerian Bar in 1979.

At the Bench ,My Lord distinguished My Lord’s self ,sitting early and churning out landmarked Judgements that mostly stood on appeal .

These Achievements include ,but are not limited to :

1.The Setting up of the Small Claims Court of Edo State to expeditiously determine matters of small claims with out much ado and the issuance of a Practice Direction and Handbook thereof .

2.The Organization of the first Settlement Week of the Edo State Judiciary under the hospices of the Edo State Multi Door Court House,which led to the resolution of many old cases ,thereby reducing the docket of the Courts .

5.The Creation of the Edo State Judiciary WhatsApp Info Platform made up of the Chief Registrar,Deputy Chief Registrars of the High Court and Members of the Nigerian Bar Association-the Lion Bar’s Exco ,for seamless information flow between the Bar and the Bench .

6.Refurbushment of the Court Rooms in the Headquarters Old Complex and Handing over and operational use of the New Complex of the High Court .

7.Proper Management of issues to satisfaction of Litigants in a way that prevented any crisis or scandal during My Lord’s reign as Chief Judge of Edo State .

8.The provision of Two Rooms as Lawyers’ Cloakroom for Members of the Bar ,one in the old Complex and another in the new Complex .

9.Provision of additional land for the NBA Benin Branch -the Lion Bar for the expansion of the NBA Benin Bar House ,for which a new complex B is being built ,which will contain the Hon Justice E.A. Edigin Gymnasium .

10.Creation of a vibrant sports and fitness regime in the Edo State Judiciary .

11.Instilling of Discipline among Staff of the Edo Judiciary and meting out of the appropriate disciplinary measure to erring staff .

12.Ensuring a healthy relationship between the Bar and the Bench that made the Benin Bar for the first ever to organise a valedictory luncheon for any Chief Judge of Edo State in My Lord’s Honour at an exquisite venue .

13.My Lord Vide a Practice Direction is credit as the Chief Judge that introduced Virtual Court Sittings in Edo State ,heralding a new dawn where technology and virtual conferencing is used for Court Proceedings .

My Lord’s tenure was short ,about one year and four months ,but it was eventful as it had giant strides that will be highlighted for long time to come in the annals of the Edo State .My Lord has indeed imprinted my Lord’s footprints in the sands of time .As My Lord celebrates My Lord 65th Birthday today and now out gloriously from the Edo State ,we are reminded by the immortal words of Abraham Lincoln the 16th President of the United State ,that :

“It is not the length of life that matters ,but the depth of life “.

We wish My Lord fruitful years ahead of good health for as stated by William Shakespeare in his Classic” Julius Caesar,we can as well re-echo that My Lord : *Veni, vidi, vici* -“You came you saw and you conquered”.

Douglas Ogbankwa Esq. a Benin Based Lawyer is the President of the Vanguard for the Independence of the Judiciary,(V4IJ)