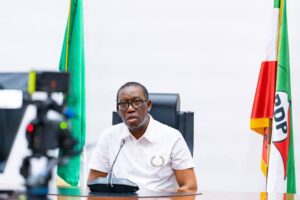 THE Delta State Governor, Ifeanyi Okowa, has said in the next one month, the process of picking a successor that would govern the state fairly, equitably and justly, would begin.

He said his successor must be ready to be a governor that sees the whole of the state as his constituency.

Okowa, whose second and final four-year term as governor ends on May 29, 2023, said this in Asaba, on Saturday.

“And for those of them jumping ship because of a little envelope, please let us caution them. I thank God my brother, Elumelu, invited 80 councillors from the four local governments of his constituency, and we are glad about that.

“But we also know that in this same state previously, it would just be about 56 councillors because some people just felt that as Delta North people, and particularly Aniocha/Oshimili that we were not politically mature to have 20 councillors in each local government. Why would that be?

“And the same hands that orchestrated that, are the same people throwing envelopes at our people, and a few of them are jumping at such envelopes.

“Whosoever that is coming to rule this state must be ready to ensure that there is fairness, justice and equity in everything.

“We want somebody who will come to Asaba and see it as his own, rather than feel that Asaba, as Headquarters is misplaced. It ought not to be.”

2023: Osinbajo has not declared interest to run for President — Akande

2023: Osinbajo has not declared interest to run for President — Akande

2023: NNPP Woos Osinbajo, May Offer Him Presidential Ticket If He Joins Party