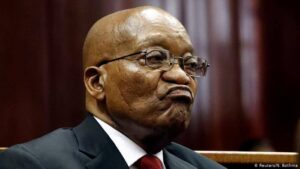 South Africa’s scandal-tainted ex-president Jacob Zuma arrived in court Monday for the expected start of a trial in a 20-year-old bribery case.

Zuma is facing 16 charges of fraud, graft and racketeering relating to a 1999 purchase of fighter jets, patrol boats and military gear from five European arms firms for 30 billion rand — equal to almost $5.0 billion at the time.

The 79-year-old Zuma, who was at the time serving as deputy president to Thabo Mbeki, is accused of accepting bribes amounting to four million rand from one of the firms, French defence giant Thales.

Over the years, the case has been postponed numerous times as Zuma lodged a string of motions to have the charges dropped.

In the latest snag last month, all of Zuma’s lawyers quit, without giving a reason.

It is unclear whether at Monday’s hearing Zuma will ask for a new postponement to reorganise his defence, or whether he chooses to represent himself during the proceedings, which he has called a political witch hunt.

Dozens of people, including senior ruling ANC officials like the recently suspended party secretary general Ace Magashule, rallied in show of support for the embattled former head of state at the Pietermaritzburg High Court.

“I am here to support president Zuma,” Magashule told AFP, dismissing the trial as “so political”.

A crowd of supporters dressed in yellow party T-shirts and waving ANC flags, chanted outside the court house.

“We should allow president Zuma, with grace and dignity, to rest at home,” an ANC lawmaker and former North West provincial premier Supra Mahumapelo said.

He said Zuma has “consistently maintained no one is above the law. He has always submitted himself to the law. But at his advanced age, he should be allowed to go into obscurity and we to move forward as a society”.

In power between 2009 and 2018, Zuma was forced to resign by the African National Congress after a mounting series of scandals.

His successor Cyril Ramaphosa has vowed to root out corruption.

Why I’m Yet To Appoint Commissioners — Obaseki