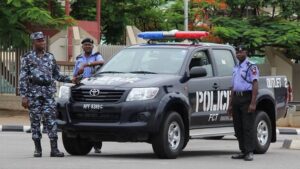 A pastor’s wife, one junior pastor and a third person have been arrested in connection with the alleged trafficking of a 23-year-old woman in Delta State.

Detectives from Ughelli ‘A’ Division apprehended the three suspects in Oviri-Ogor community.

Sources said the suspects first took Oghenfejiro Obotakpore to a woman in Bayelsa State before trafficking her to Libya.

One of the suspects was identified as Sunday Adeyemi, an assistant pastor of a white garment church, while the identities of the pastor’s spouse and the third suspect were yet to be ascertained at press time.

The pastor’s wife and the junior pastor were picked up following a text message from Obotakpore in Libya.

In the message sent to her family, the trafficked lady was said to have detailed her ordeal in the North African country, leading to the arrest of the three suspects.

A community source said, “Obotakpore sent a text message to one of her relatives about her ordeal in Libya and the leadership of the community was notified. The incident was immediately reported at Ughelli ‘A’ Division which led to the arrest of the pastor’s wife whose husband is a founder of a white garment church in Evwreni. The Assistant Pastor in Oviri-Ogor and one other lady who mastermind the arrangement in Bayelsa State were also arrested.

“Yes, such a case was reported and the police have arrested three persons suspected to be in connection with it,” he said. “On April, 10, a community leader from Oviri-Ogor reported that one man conspired with a woman and trafficked one Fejiro Obotakpore Marian aged 23, to Libya without the consent of her parents.”

Police spokesman Edafe Bright confirmed the incident, saying, “Investigation is still on and it’s believed that the girl has been asked to come back to Nigeria”.

Your Score card as Chairman NBA, Benin Branch, (the Lion Bar) – Pius Idemudia Oiwoh, presented today the 12th of May, 2021-Your Birthday

IT IS NOT ENOUGH: Victim reacts as #Endsars panel awards N7.5m compensation

IT IS NOT ENOUGH: Victim reacts as #Endsars panel awards N7.5m compensation