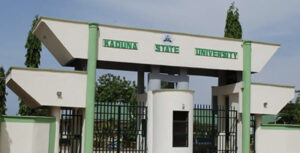 The management of the Kaduna State University, KASU, has reacted to the rumoured news making the rounds on the social media over increment of tuition fees from N26,000 to N500,000.

According to the management, consultations are ongoing with stakeholders to do upward review insisting that no official announcement has been made public yet.

The management made the confirmation in a statement made available to journalists, by the university’s Public Relation Officer, Adamu Bargo.

Mr Bargo explained that the upward review was due to the present reality and efforts to improve the standard of learning.
He added that the decision was also to enhance development in the university.

The PRO said that available record showed that N400 million was being spent monthly and N4.8 billion annually by the Kaduna State Government on payment of the university’s staff salaries.

He said that N25 million was also being spent as overhead monthly, while the university generates only N765.9 million as internally generated revenue annually.