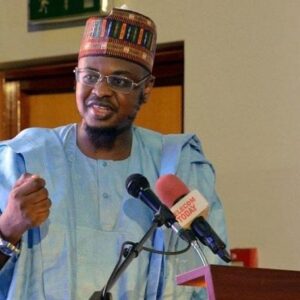 Minister of Communications and Digital Economy, Isa Pantami, has renounced his past controversial comments on terrorist groups including Taliban and Al-Qaeda.

The minister said he was young when he made the radical comments, adding that he is now matured and now knows better.

He spoke while answering questions during his daily Ramadan lecture at Annor Mosque in Abuja on Saturday.

“For 15 years, I have moved round the country while educating people about the dangers of terrorism. I have traveled to Katsina, Gombe, Borno, Kano states and Difa in Niger Republic to preach against terrorism.

“I have engaged those with Boko Haram ideologies in different places. I have been writing pamphlets in Hausa, English and Arabic. I have managed to bring back several young persons who have derailed from the right path.

“Some of the comments I made some years ago that are generating controversies now were based on my understanding of religious issues at the time, and I have changed several positions taken in the past based on new evidence and maturity.

“I was young when I made some of the comments; I was in university, some of the comments were made when I was a teenager. I started preaching when I was 13, many scholars and individuals did not understand some of international events and therefore took some positions based on their understanding, some have come to change their positions later,” Daily Trust quoted Pantami

Pantami has come under fire over his alleged link with terrorist groups, with many Nigerians calling on President Muhammadu Buhari to sack the minister.

The Nigerian Twitter community also said the minister could not be trusted with the data of Nigerians, especially with the ongoing National Identification Number and Subscriber Identity Module integration exercise under his watch.

In a viral video recorded many years ago which was later confirmed by his lawyer, Michael Numa, the minister was seen engaging the late Boko Haram leader, Mohammed Yusuf, in a public debate.

Pantami, an Islamic scholar, according to Peoples Gazette, also once declared that he was always happy when infidels were massacred.

Peoples Gazette said Pantami’s comments were contained in three audio recordings of his teachings in the 2000s, when he took extreme positions in support of the brutal exploits of Al Qaeda and Taliban elements on a campaign to obliterate the West and conquer other parts of the world.

But the minister in his latest interview said his statements were misconstrued, rejecting affiliations with terror groups.

The hashtag #PantamiResign has since been trending online. The supporters of the minister have also come up with a counter-hashtag – #PantamiWillStay.