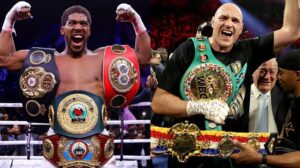 The long-awaited Battle of Britain moved a huge step closer to coming to fruition this week after the pair agreed on a venue for the first of their two showdowns.

And according to talkSPORT reporter Jim White, the first instalment of Joshua vs Fury is on the brink of being snapped up by the Saudis.

White tweeted: “Saudi offer ‘real and acceptable to all parties’. Minor details to be agreed.

Saudi Arabia has been the frontrunner to land the blockbuster fight ever since the two-bout deal was announced last June.

ESPN’s Mark Kriegel said earlier this week: “What’s been agreed is that both Anthony Joshua’s camp and Tyson Fury’s camp want to fight in Saudi Arabia.

“Saudi Arabia was the frontrunner from the beginning, and that’s where everybody wants to go now.

“It’s not real until someone under the auspices of the Saudi government puts money into escrow.

“Both sides have yet to sign – this is a crucial document – a memorandum of understanding.

“I’ve had several sources tell me today that they’re, ‘waiting for the paperwork from Saudi.’

Despite all signs pointing to a Saudi showdown, AJ is still clinging on to the faint hope of a Wembley war with The Gypsy King.

During an appearance on The Jonathan Ross show, he said: “I’ve signed my side of the deal.

“We’ve sent him a good offer, one I’m sure he won’t refuse.

“He wants the fight, no doubt about it.

“So do I and more than me and him, the whole public want it.

“I put my crystal ball out there and I say it’s going to happen this year 100 per cent.

“I’m pretty sure it’ll be this year. End of July, early August.

“Where? That’s what’s the delay, because of this pandemic. We want to have people coming to the venue.

“It’s just finding the right location. For me, Wembley would be ideal.”

Fury, meanwhile, has been on the sidelines even longer than AJ – last taking to the ring in February 2020 for his WBC title fight with Deontay Wilder.

How Lagos domestic worker fled with N13.9m cash, jewellery one week after resumption