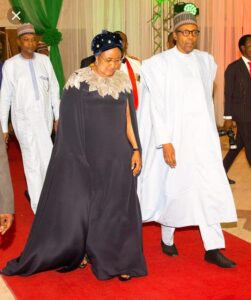 President Muhammadu Buhari has hailed his wife the First Lady, Aisha Buhari, saying she has helped in improving the lives of Nigerians.

Buhari said the book recently launched by the First Lady has given him the opportunity to say a few things about her.

According to him, Aisha has been able to defend women, children and the vulnerable in society.

“Aisha as the world has come to know her is kind-hearted; this made her transitioning into philanthropy and humanitarianism easy when she became First Lady. Her protective mien also translates to the special energy she exerts when women, children, and vulnerable people are abused. I have observed with keen interest as she addresses many of the social concerns that have given her sleepless nights,” he said in the foreword of his wife’s book.

“Her programme, Future Assured, has provided her with a special vehicle to actualize her dreams: reaching the poor, sick and underprivileged families to improve their wellbeing, sometimes in remote areas, especially IDPs.

“The stance she has taken in defence of women in our society across our rich ethnic diversity also ranks very high amongst her passing. This plays a significant role in her ability to organize and coordinate like-minded people around a singular agenda.”

Buhari said the effort by his wife in helping Nigerians and making the country better has made her a worthy partner for him.

“All these have added impetus to the effort of the government in improving lives of Nigerians through a more robust economy and a nation worthy of our love and pride. She has therefore been a worthy partner and a beacon for some of the good things that Nigerians have come to identify with our government,” he said.

Cleric arrested for abducting teenage girl for ritual in Ogun