See why ex- governor of Edo, Oshiomhole donated multi-million church to his hometown and what inspired him 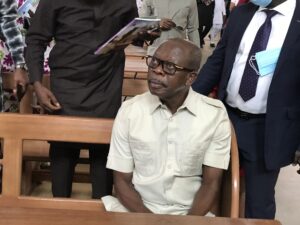 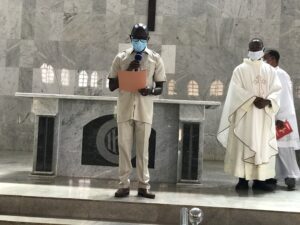 The immediate past National Chairman of the All Progressives Congress (APC), Comrade Adams Oshiomhole, has stated he donated a multi-million church in his Iyamho hometown in Etsako West Local Government Area of Edo State to glorify God for his 69th birthday.

Oshiomhole, a former Governor of Edo State, spoke during dedication of the befitting edifice at St Joseph Catholic Church, Iyamho and its canonical errection to a parish.

Edo Deputy Governor, Philip Shaibu, a chieftain of the main opposition Peoples Democratic Party (PDP), who is a political godson to Oshiomhole, attended the events.

He however declined to make comments and or grant interview to waiting reporters.

The ex-labour leader said he got the inspiration for m design of the church, while he was looking for sponsors for the state-owned Edo University, Iyamho.

According to him: “I wanted a faith-based organisation, particularly the Catholic Church, to manage the new university. I had the opportunity of visiting the Loyola Jesuit College in Abuja and some Loyola universities in the USA.

“So, we visited the Loyola Jesuit headquarters in New York City, USA. We had a conversation and I realised the amount of time it would take to be able to start would be long, we did not have that much time and I wanted the university to take off before the end of my tenure (in 2016).

“After the conversation, my daughter, Winifred, took me to the Jesuit church within the premises of the university.

“From outside, just like what we have here (in Iyamho), it looked this way, but when we got inside the church, it was a fine design of plank.

“The administrator of the Jesuit church explained to us that they used plank to prevent painting it every six months. So, that was where I got the idea of this design.

Wahala: Woman finds out on son’s wedding day that bride is actually her long-lost daughter

Imo correctional centre attack: No one deserves to be in prison in Nigeria – Nnamdi Kanu

Imo correctional centre attack: No one deserves to be in prison in Nigeria - Nnamdi Kanu

Ayade’s defection: We are greatly shocked and embarrassed — Gov Ishaku